Hi, I'm Dj_Ossa. I used to be very active in the community a while ago, getting back on SM because fuckit, why not?

I suck at stepmania (haven't played in almost 6 years) but I would be down for some smoing if you're willing to play old files.
Top

Here, have this simfile I made for him, a long time ago, with love.

bboy ejaculation theme right? I have it already. I'm blindreper1179 from ffr.

Powerdrift
Posts: 1
Joined: Sat May 25, 2013 11:55 am
[phpBB Debug] PHP Warning: in file [ROOT]/vendor/twig/twig/lib/Twig/Extension/Core.php on line 1266: count(): Parameter must be an array or an object that implements Countable

Hi, I'm Powerdrift. I haven't played in a while, can't play for shit anymore.
Top

Welcome to smo. It is better to play for fun than competitively anyway.
Top

Yotipo
Posts: 1
Joined: Mon May 27, 2013 10:45 am
[phpBB Debug] PHP Warning: in file [ROOT]/vendor/twig/twig/lib/Twig/Extension/Core.php on line 1266: count(): Parameter must be an array or an object that implements Countable

I didn't see that topic before, sorry.

Well, I'm OkkusenmanX, but the nickname doesn't really matter for me, I change it pretty often ahahaha. I live in France (and I'm french), I'm 22 years old, male and... I can't speak english very well, but I try to make me understandable for everyone, I hope it's the case ^^'.
Anyway, I played rythm game for a long time, but not at very high level. I started with DJmax on PSP, then I played O2mania (O2jam's emulator, allow to play offline). I played O2mania for many many years, it's difficult to find good song, but I liked the gameplay so I endured it. Since the release of Hatsune Miku Project Diva f on PSVita, I played it, and the older Hatsune Miku game too, mainly on PS3 thanks to the Dreamy Theater Extension and the release of Project diva F (PS3 version). I'm not too bad at this, but it's really simple so no pride comes from it.

Well, two weeks ago, I was staring at my screen, doing nothing in the middle of the night, and suddenly... "hey, why not Stepmania ?". I used to play stepmania for a very short period many years ago, but I didn't like the software and the gameplay, the arrows, the fact that they go up, all that stuff. But the community is very active in term of simfile's production, and I wanted new and good song. So I downloaded it, and in a matter of fact, the V5 is really good ! I don't know if it was possible in the old version, but it's pretty easy to make the arrows goes down instead of up, to install noteskins with no arrows... and this is the way I want to play. So now, I play stepmania at least once a day, not for a very long session, but forty minutes of stepmania per day is nice = )

Like I already said, I'm not very skilled, I can play on expert and hard if the level isn't too high but I die in many many songs from famous keyboard pack such as Otaku's Dream's packs (the harder ones, of course, but still...). I play mainly for the fun, not competition. I'm so happy that I can play online, with actual people. I used to play alone for so many years, I know very few people who likes rythm game IRL, so it was like a dream when I discovered SMO the first time.

What's more ? I'm currently facing a bug with otaku's dream's pack, like I said in the help section, I can't play all the songs from this packs with anyone else so excuse me if I met you online and it bug. I play spread (one week ago, I didn't know it's called "spread"), a-s-5-6 in c850 or c900, I'm using a azerty keyboard, like everyone in France, but Stepmania act like it's a qwerty. I'm pretty sure there is no way of fixing it. It's really annoying when I want to write something in the room's chat. I'm bad at english, so I'm slow to written AND I must search for what letter is what letter... ah... So excuse me if I'm typing very slowly.

Welcome Okku! The bug with not being able to play some songs might be your computers region. Sorry, I can't find the thread right now, but try changing it to Japan/Japanese. If that doesn't work, I'm sorry.
First to get 1,000,000 xp.
R.I.P. first place.

I already did the region's change, some packs (the one with specific characters) won't load if I'm not in japanese region.
Top

I learned Stepmania one year ago.Before that,I often play Beats(another rhythm game)on my tablet.(Now I'm developing images for it.)
I like Stepmania!! 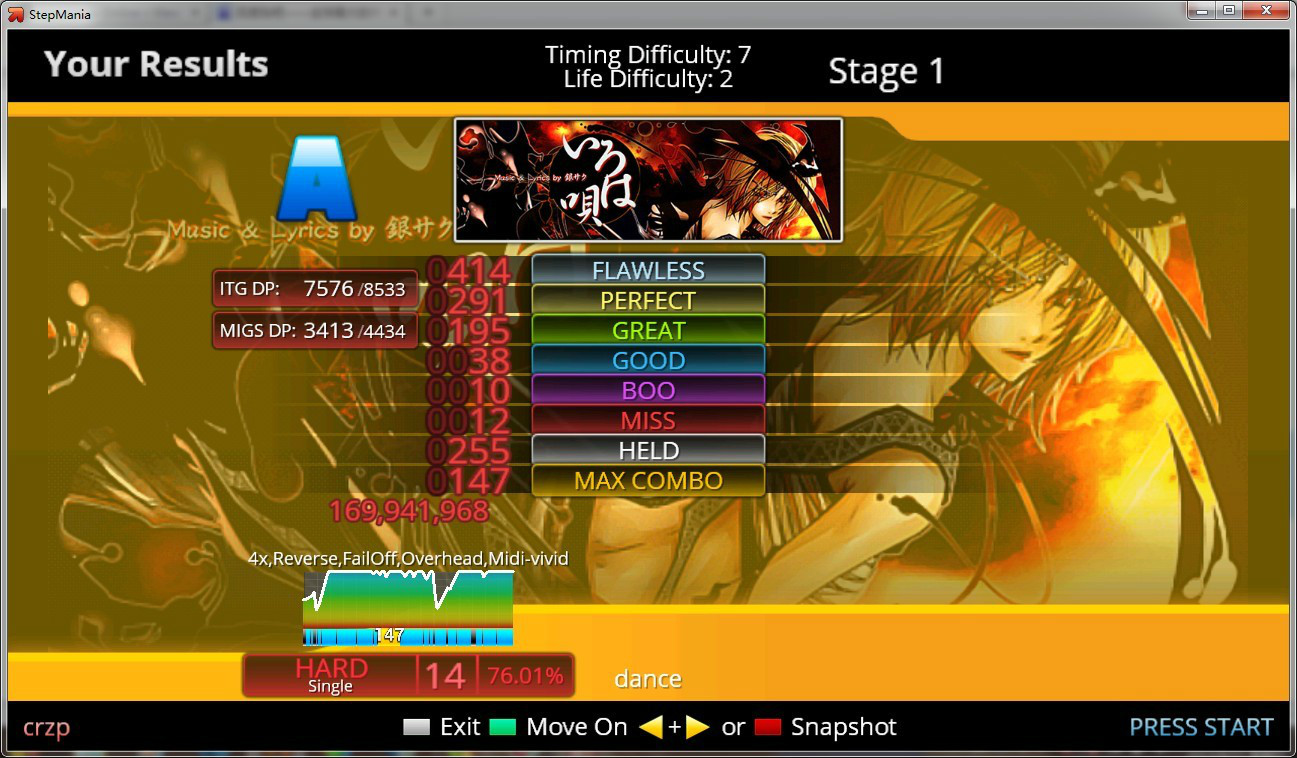 )A true Vocaloid fan!
We are sigma group!
Top

hi, i'm dynamoxtyle and it's nice to met you

i play when gotta resting from work and university

Niglo
Posts: 5
Joined: Wed Oct 30, 2013 10:48 am
[phpBB Debug] PHP Warning: in file [ROOT]/vendor/twig/twig/lib/Twig/Extension/Core.php on line 1266: count(): Parameter must be an array or an object that implements Countable

Hi everyone, I used to play pretty competitively back on FFR in '05 but I'm pretty terrible now!

Just wanted to stop in here and say Hello!
Top

Hello, I'm Trainmon, and I've been playing Stepmania for about 3 years now. I'm pretty good at it so far, but I know I have a lot of room to grow.

Currently, I have two goals I'm focusing on. One has been increasing my judging difficulty (just from 4 to 5 for now), and the other is learning a layout other than the regular arrow keys so I can hit triple notes (I think I found a EF-JI format I'm learning pretty quickly).

In terms of songs, I've mostly been using MLP, SRT, and Windeu packs, and have recently started trying out the Otaku's Dream Mix's which I really enjoy, despite needing to learn a new key layout to play it.

I look forward to playing online with you guys!
Top

Hey guys, I'm Frenetik MHz (or Jon). I live in the pittsburgh area and started playing about five years ago.

I've been out of the stepmania/FFR/DDR loop for a couple of years and I'm trying to get back into it. More or less for weight loss and fun than anything.

When I stopped playing, I was on the cusp of getting into heavy/hard mode and then life got in the way. I want to be able to do this again and I hope to get to know the nice people on this forum.
Top

What's up, I'm from the Pittsburgh area too! I play ITG and a little bit of stepmania.

razl
Posts: 19
Joined: Thu Dec 19, 2013 5:38 am
Location: Finland
[phpBB Debug] PHP Warning: in file [ROOT]/vendor/twig/twig/lib/Twig/Extension/Core.php on line 1266: count(): Parameter must be an array or an object that implements Countable

Hi, I'm razl. I've been playing StepMania since 2005 I believe. My introductions are usually...very poor. I like making simfiles..? I'm from Finland. Yay. You can find me in-game occasionally under the name "zespread" :L
why staiain why are you so pro
Top
Post Reply
[phpBB Debug] PHP Warning: in file [ROOT]/vendor/twig/twig/lib/Twig/Extension/Core.php on line 1266: count(): Parameter must be an array or an object that implements Countable

Users browsing this forum: No registered users and 1 guest